In addition to having 3 papers accepted for inclusion in the Paris 45 conference in August,  AP C5 has also been involved with a number of working groups under Study Committee SC C5, notably:

AP C5 has also taken on the role of coordinating and managing the Market Disturbance Workshop to be held at the 2014 Paris session.  The abstracts of the proposed presentations are now being collated and the Convener and IP Convener will be reviewing these in the coming weeks. 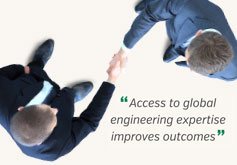 The engine room of the Cigré model is its approach to networking and sharing know-how. more >