The CIGRE Australia Paris Session scholarships are offered to two CIGRE young engineers to attend the biennial Paris Session.  This provides the recipients with a unique opportunity to see what is happening globally in the Electricity Sector, learn of some of the innovations taking place  and to begin to develop their international professional networks.

The Paris session brings together over 3500 professionals from utilities, manufacturers, regulators and academia to showcase and discuss global work and investigations.

The Session also has a large exhibition with over 240 exhibitors including the larger manufacturers such as ABB, Alstom, 3M, Schneider Electric , Siemens, EDF, Hitachi and many others.

CIGRE Australia Executive Manager Terry Killen said that the nominations received had been of a very high standard with several member companies running an internal application/selection process prior to forwarding their candidates.

However , Terry said that he was very pleased to be able to announce that the two recipients of the CIGRE Australia 2016 Paris Session Scholarship are:

Matthew Ridgley of Ergon and Emma Rogers of Energex.

Terry commented that "..Both of their applications and submissions were of very high quality and we look forward to working with them on developing a program for their attendance at the session. " 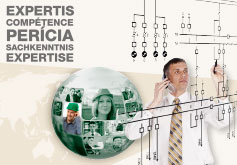