Agile telecommunications networks in power utilities are particularly important to address new systems integration challenges brought by renewables and distributed energy resources as part of the energy transition.
WG D2.43 has recently produced Technical Brochure (TB) 866 which examines increasing the agility of telecommunications networks through software defined network (SDN) and network function virtualisation (NFV).  These technologies may provide benefits to some areas of power utility operations where flexibility is required.  The Australian Convenor was Victor Tan.

At the core of SDN, networks are viewed as a collection of services that seamlessly interoperate with each other using a common language. This language is referred to as the Application Programming Interface (API).

For example, network switches, firewalls and routers integrate with network management systems via a collection of APIs published by the vendors of these devices.  However, underlying structures and methods to send API messages are standardised.

Routers may be asked to perform a certain task, or firewalls may be injected with certain cybersecurity behaviours by a network management system which implements the published APIs. These APIs can also be viewed as messages to effect certain state changes or behaviours on telecommunications network equipment. These API messages are sent through well-known standardised methods. Rather than re-inventing the wheel, SDN uses a collection of pre-existing methods defined by international bodies.

This results in a powerful, flexible and extensible system where telecommunication equipment communicates via well-understood messaging APIs published by their respective vendors, over a well-supported and mature set of message sending methods. This is shown in Figure 1. 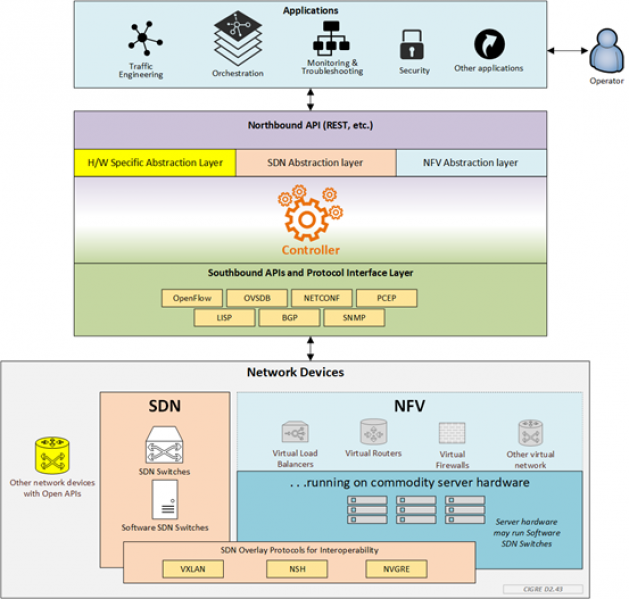 NFV is a separate concept but closely related to SDN. Both are commonly used together and exist alongside each other.

The benefits of virtualising physical hardware include reducing the footprint required, by consolidating multiple pieces of hardware into one or two highly-available physical hosts.

From a system management perspective, virtualising and consolidating disparate physical hardware into common hardware provides operational efficiency, because NFVs are also enabled with APIs capable of being managed by modern systems such as the SDN management system mentioned previously.

This also applies to non-telecommunications equipment. The trend of virtualising HMIs (Human Machine Interfaces), RTUs (Remote Terminal Units) and IEDs (Intelligent Electronic Devices) is increasing due to these benefits, and we have seen some utilities in Australia adopting virtualised HMIs and virtualised RTUs.

A view of how the various virtualised components integrate into the utility telecommunications network is shown in Figure 2. In this view, various physical components are virtualised into NFVs, including power systems components such as HMIs, RTUs and Data Concentrators. This approach provides the benefits of consolidation and management efficiency using SDN concepts such as APIs described above. 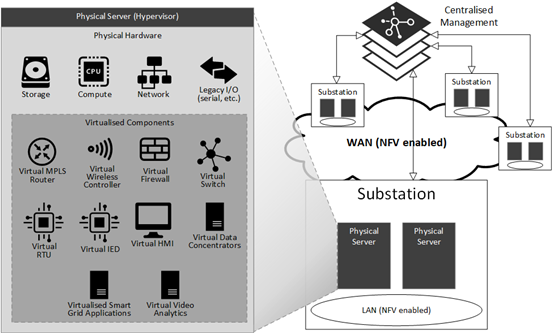 The technical brochure also provides coverage of other cases, including using NFV and SDN for network modelling and staff training, as part of a utility’s hybrid cloud strategy.

Granted, the power industry moves relatively slowly and cautiously in terms of adoption of cutting edge solutions, and rightly so, due to the risks of incorrect implementation.  However, there are gains to be made even with some partial form of low-risk adoption – for example, adoption of virtual cybersecurity devices (such as firewalls and intrusion prevention systems) and virtual HMIs and virtual data concentrators at the substations.

In summary, SDN and NFV are important technologies for power utilities to consider due to their potential to increase the efficiency and agility in provisioning services, as utilities face rapidly changing telecommunication and information systems requirements brought by distributed energy resources (DERs) and renewables. Utilities should consider new methods such as SDN and NFV as part of their innovation strategy, to assess the appropriate level of adoption in these areas.

The TB is free for members and 120€ for non-members from e-cigre.