WG B4.63 “Commissioning of VSC HVDC Schemes”, convened by Les Brand from Australia.

Voltage Source Converter (VSC) technology has emerged as a commercially viable alternative to Line Commutated Converter (LCC) technology for certain applications of HVDC power transmission. With the first commercial VSC projects commissioned in the late 1990s, there is over a decade and a half of project and operational experience with this technology. VSC has become the preferred choice of technology for specific applications, including low power transfer applications, the connection of weak networks, offshore wind farm connections and d.c. grid developments.

Commissioning is the final stage of an HVDC project. It allows the HVDC supplier to verify and demonstrate the suitability of the installed equipment, the functional completeness of the system and compliance with the requirements of the relevant contracts and specifications. Commissioning also allows adjustments and optimization to the HVDC system to be made and allows the owners, developers and/or end-user of the HVDC system to witness and be satisfied that the project and operational requirements have been demonstrated.

The figure below describes the overall commissioning process. 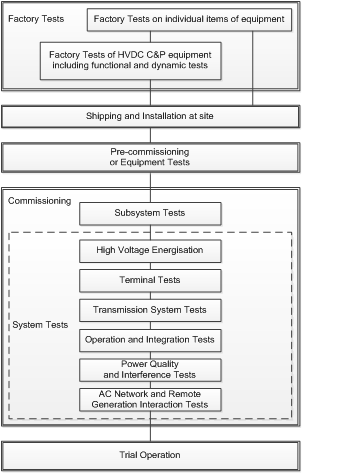 Some key challenges associated with the commissioning of VSC HVDC systems in today’s environment include selecting a subset of the factory testing program to be repeated on site, commissioning in a market environment and limitations to active and reactive power levels during commissioning. Certain applications often associated with VSC transmission will also have their own challenges, including off-shore wind power projects, multi-terminal systems, offshore platform loads and d.c. lines with parallel a.c. power lines.

The full technical brochure providing guidelines on the testing and commissioning of VSC HVDC schemes, is expected to be published before mid-2017.