Wind generation is the fastest growing energy generation in the world.   As favourable onshore sites are used up, new sites, often in remote parts of the network or offshore, are being considered.  These sites can be in relatively weak parts of the power system leading to special challenges.  CIGRE Working Group B4.62 has been investigating this problem and will shortly issue a Technical Brochure that will identify the issues and provide a guide for connecting to these systems.  Nalin Pahalawaththa, the previous convenor of Australian Panel B4, leads this global Working Group.

In recognition of the importance of the work to many utilities across the world, the working group is also running a workshop at the 2016 Paris CIGRE Session.  It will be held on the morning of Thursday August 25. 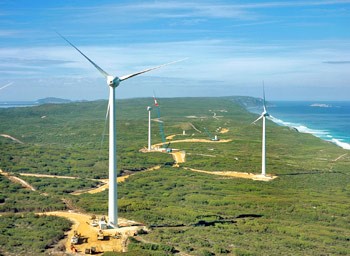 In recent years, wind generation has been the fastest growing energy generation sector worldwide. Wind farms with capacities of 100-1000 MW or more are being constructed both onshore and offshore. Many of the favourable sites, in particular the onshore sites, have now almost been fully utilised. The windfarm developers are now focusing attention on the less favourable sites.

Thus, the future windfarms will likely to be connected to weaker parts of the power transmission networks requiring power transmission over long transmission distances, and causing potential system stability issues. Wind proponents are also now developing multiple wind power plants closer to each other, increasing the likelihood of adverse interactions and exerting pressure on networks to manage system security and supply quality.  The size of the wind turbines has also grown exponentially, with the new developments now concentrating on turbine sizes above 5 MW.

CIGRE working group B4.62 has addressed the issues that can arise when wind power plants operate in weak AC systems and has produced a guide for connecting to these systems.  The work has drawn on experiences from a number of utilities, manufacturers and consultants worldwide.

The wind farm connection guide summarises, the issues that can be anticipated, the potential solutions available, how to screen a connection for the expected performance and issues, how to assess the potential issues and solutions, and how to proceed in developing a connection in consultation with the wind power plant manufacturer.

The TOR of the working Group can be downloaded here

The paper will be made available to members on the e-cigre site following the Paris Session.