The 2016 year was another busy year as it saw the biennial Paris Session in late August.  This year we had a record attendance from Australia/NZ of CIGRE members including several CEO’s from our member organisations and most of our board members.

CIGRE Australia was pleased to be able to sponsor Emma Rogers from Energex and Matthew Ridgley from Ergon as winners of our Paris Scholarships as well as part sponsor an additional four young engineers to attend and participate in the event.  Emma has prepared an interesting summary of the Technical exhibition for this edition.

The session itself saw a record attendance of 3290 and more than 8000 participants from 93 Countries.

Overall membership continues to grow as we ‘get the word out’ and make participants in the industry aware of what CIGRE does and the value that it can add to business.  We have initiated a membership drive offering an incentive for existing members to introduce new members to the organisation and the work that CIGRE is involved in.

We now have some 594 equivalent members, which places us 8th in terms of numbers Globally. Our young engineer members (NGN) continue to grow, and are now at 290 and we also have 143 Student members  (these are not counted in the equivalent member numbers).  The young member participation particularly augurs well for the future. 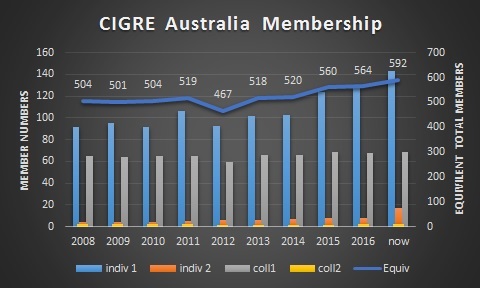 The ongoing and sustained efforts of three of our members were recognised at the Paris Session :

Phil Southwell – received one of the inaugural Fellow Awards for his work in leading international and regional work over a long period of time.

Rob Lake – received an award of technical excellence recognising his sustained efforts and leadership in the technical working groups.

During the year we have strengthened our bond with the Pacific Power Association and welcomed two of its members to our Panels as well and the membership of the Public Utility Board of Kiribati. We were also pleased to welcome the Exec Director of the PPA, Mr. Andrew Daka to our AGM in Melbourne.

There is no doubt that CIGRE Australia continues to punch above its weight and make significant technical and work contributions to CIGRE globally and within the region.

During 2017, we will again be hosting a CIGRE workshop day prior to the Techcon conference the SEAPAC event in March (now in its 6th edition) and the CIDER event in August.

More information on all these events can be found on our events site and will be added to as planning progresses.