At the 2014 Paris CIGRE Session, Phil Southwell of Western Australia received the distinguished title of honorary member – only one of five Australians ever to do so.

Honorary membership is rare and awarded to members who have proven participation in CIGRE technical activities in a leadership role of CIGRE, and for members whose service of CIGRE has been judged exceptional.  Click here for more detail 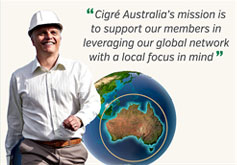